Spectrometry and Spectroscopy: What’s the Difference? 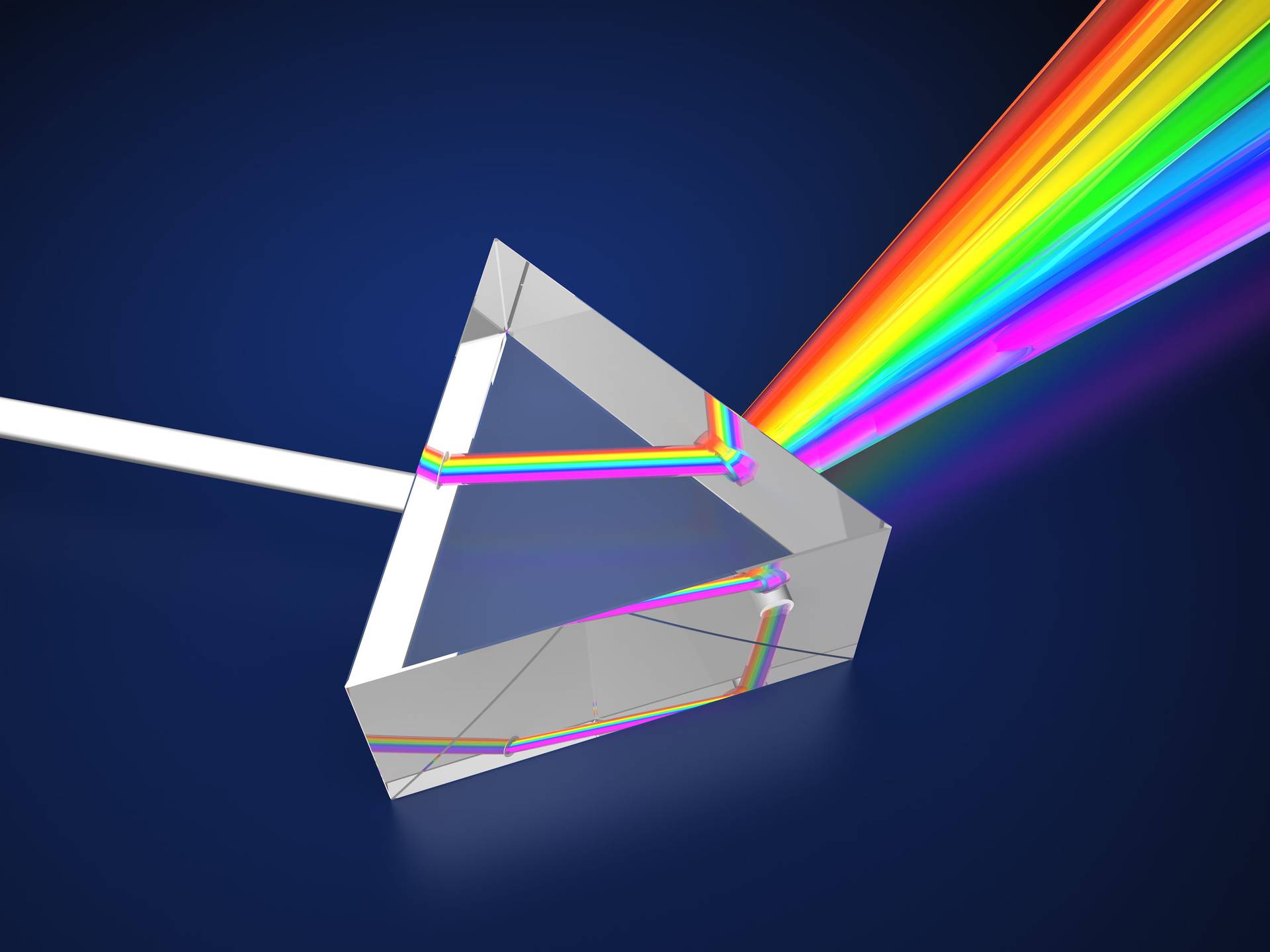 Scientific terms are often used interchangeably, and scientifically-accepted descriptions are constantly being refined and reinterpreted, which can lead to errors in scientific understanding. While such errors can’t be completely eliminated, they can be reduced by making ourselves aware of them, better understanding the terminology, and using thoughtful and careful scientific methods. This is certainly true when it comes to understanding spectroscopy and spectrometry which, despite being similar, aren’t the same thing. With this in mind, let’s take a deeper look at these terms.

Spectroscopy is the study of the absorption and emission of light and other radiation by matter. It involves the splitting of light (or more precisely electromagnetic radiation) into its constituent wavelengths (a spectrum), which is done in much the same way as a prism splits light into a rainbow of colours. In fact, old style spectroscopy was carried out using a prism and photographic plates.

Modern spectroscopy uses diffraction grating to disperse light, which is then projected onto CCDs (charge-coupled devices), similar to those used in digital cameras. The 2D spectra are easily extracted from this digital format and manipulated to produce 1D spectra that contain an impressive amount of useful data.

Recently, the definition of spectroscopy has been expanded to also include the study of the interactions between particles such as electrons, protons, and ions, as well as their interaction with other particles as a function of their collision energy.

How spectroscopy is used

Far from being a specialised, unique field, spectroscopy is integral to a variety of disciplines. While it provided a theoretical backing to early quantum research in radiation and atomic structure, it also has a staggering number of other applied uses; magnetic resonance imaging (MRI) and X-ray machines utilise a form of radio-frequency spectroscopy, we measure the unique makeup and physical properties of distant astral bodies through their spectra and wavelength, and it’s even used to test doping in sports.

The different types of spectroscopy are distinguished by the type of radiative energy involved in the interaction. In many applications, the spectrum is determined by measuring changes in the intensity or frequency of this radiative energy. The types of spectroscopy can also be distinguished by the nature of the interaction between the energy and the material. Examples include:

This type of spectroscopy is chiefly concerned with the analysis of objects in space. From simple spectroscopic analysis of an astronomical object, we can measure the spectrum of electromagnetic radiation and determine its wavelength. This can tell us about the object’s chemical composition (as a factor of their spectra and mass), temperature, distance and speed (using a function of their wavelength and the speed of light).

Biomedical spectroscopy is a type of spectroscopy that’s used in biomedical science. For example, magnetic resonance spectroscopy (a specialised technique associated with magnetic resonance imaging) is often used to diagnose and study chemical changes in the brain that can cause anything from depression to physical tumours, as well as analyse the metabolic structure of muscle. This works by mapping a spectrum of wavelengths in the brain that correspond to the known spectrum, and carefully analysing patterns and aberrations in those patterns.

Energy dispersive X-ray spectroscopy (otherwise known as EDS/EDX) is used for the identification and quantification of elements found in a sample. This technique is used by the Phenom ProX Desktop SEM. It can also be used in conjunction with Transmission Electron Microscopy (TEM) and Scanning Transmission Electron Microscopy (STEM) to create spatially-resolved elemental analysis in areas as small as a few nanometres in diameter.

Spectrometry is the measurement of the interactions between light and matter, and the reactions and measurements of radiation intensity and wavelength. In other words, spectrometry is a method of studying and measuring a specific spectrum, and it’s widely used for the spectroscopic analysis of sample materials.

Mass spectrometry is an example of a type of spectrometry, and it measures masses within a chemical sample through their mass-to-charge ratio. This is usually done by ionising particles with a shower of electrons, then passing them through a magnetic field to separate them into different stages of deflection. Once the particles are separated, they’re measured by an electron multiplier, and we can identify the makeup of the sample through the weight of each ion’s mass. Typically, scanning electron microscopes offer options for spectrometry based on the application.

The practical uses of mass spectronomy include isotope dating and protein characterisation. Independent roving space exploration robots such as the Mars Phoenix Lander also carry mass spectrometers for the analysis of foreign soils.

The study of spectrometry dates back to the 1600s when Isaac Newton first discovered that focusing light through glass split it into the different colours of the rainbow (known as the spectrum of visible light). The spectrum itself is an obviously visible phenomenon (it makes up the colours of the rainbow and creates the sheen you see on the surface of a puddle), but it took centuries of piecemeal research to develop the study of this phenomenon into a coherent field that could be used to draw usable conclusions.

Generations of work by scientists, such as William Hyde Wollaston, lead to the discovery of dark lines that were seemingly randomly placed along this spectrum. Eventually it was determined that these were the after-effects of the absorption of chemicals in the earth’s atmosphere.

Simply put, as natural light filters from celestial bodies in space such as the sun, it goes through various reactions in our atmosphere. Each chemical element reacts slightly differently in this process, some visibly (those on the 390-700mm wavelength that are detectable to the human eye) and some invisibly (like infrared or ultraviolet waves, which are outside the visible spectrum).

As each atom corresponds to and can be represented by an individual spectra, we can use the analysis of wavelengths in the light spectrum to identify them, quantify physical properties, and analyse chemical chains and reactions from within their framework.

Some practical ways we use spectroscopy include:

Differences between spectrometry and spectroscopy

Spectroscopy is the science of studying the interaction between matter and radiated energy. It’s the study of absorption characteristics of matter, or absorption behaviour of matter, when subjected to electromagnetic radiation. Spectroscopy doesn’t generate any results, it’s simply the theoretical approach to science.

On the other hand, spectrometry is the method used to acquire a quantitative measurement of the spectrum. It’s the practical application where results are generated, helping in the quantification of, for example, absorbance, optical density or transmittance.

In short, spectroscopy is thetheoretical science, and spectrometry is the practical measurement in the balancing of matter in atomic and molecular levels.

A spectrometer measures the wavelength and frequency of light, and allows us to identify and analyse the atoms in a sample we place within it. In their simplest form, spectrometers act like a sophisticated form of diffraction, somewhat akin to the play of light that occurs when white light hits the tiny pits of a DVD or other compact disk.

Light is passed from a source (which has been made incandescent through heating) to a diffraction grating (much like an artificial Fraunhofer line) and onto a mirror. As the light emitted by the original source is characteristic of its atomic composure, diffracting and mirroring first disperses, then reflects, the wavelength into a format that we can detect and quantify.

Find a spectrometer from ATA Scientific

ATA Scientific represents a group of highly regarded international companies, whose range of innovative instruments are used across the particle, surface, life and material sciences.

The entire line of JASCO spectrometers all utilise a central operating system, Spectra Manager. This means they easily standardise operations between different processes, are easy to use, and are usually able to be self-installed. We have options for both laboratory and teaching environments at competitive prices, and everything comes with a 12 month warranty.

No matter what kind of laboratory you need it for, if you’re in the market for spectroscopic equipment, you can’t beat our range of JASCO equipment. Contact ATA Scientific today for a free consultation and talk to us about specialist advice and training. We have both the instruments and the know-how to help you obtain meaningful and reliable analytical results.